A syringe being filled with water.

Water torture is a form of torture involving the use of water. It is generally used as punishment or to force a confession.

Among other historical eras, water torture was utilized by pagans during the time of the witch-huntsWP in the Middle Ages.[1][2] 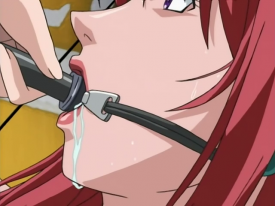 Forcing a confession out of Takashiro

After being kidnapped and brought to Saeki's apartment, art teacher Hiroko Takashiro is subjected to brutal water torture at the hands of Kaori Saeki and her friends, who are being coerced by the evil school nurse Reika Kitami.

A hose is lodged in Takashiro's mouth, forcing her to ingest water (a method known as water cureWP), while another hose is inserted in her anus, filling her with more water. Student Taki Minase later uses a large plastic syringe to pump even more fluids inside his teacher's body. She is then violated by both Minase and later Kitami before finally being able to push out all the liquid inside her. 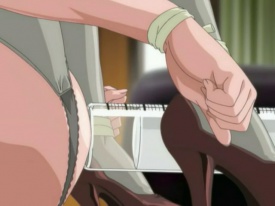 Soon after, Yukiko Minase is abused and sexually degraded by one of her professors at school. She endures several of his fetishes, including klismaphiliaWP. In a similar fashion as Takashiro's abuse earlier, the professor empties a large syringe of glycerinWP inside Yukiko's body and forces the girl to hold it in as he engages in several perverted acts.

Shiraki about to be dunked in a large water basin after she is kidnapped.

Several years later, Kaori Saeki and her newly formed coven of girls torture substitute teacher Rika Shiraki by repeatedly dunking her in a water basin while the woman is restrained. They then proceed to fill her colon with water through her anus before mercilessly whipping her engorged body.

Sometime after, student Yuki Toudou - a member of Saeki's coven - is subjected to the same fate when she is discovered to be a spy for their one of their enemies. Under Imari/Kitami's supervision and participation, the girl is harshly violated.

The player Taki Minase witnesses the torture of art professor Hiroko Takashiro in Saeki's apartment in much the same way as described above in the anime. The evil Reika Kitami even adds to the woman's suffering by forcing her to drink a full bottle of '66 Romanée-ContiWP wine in addition to the water. Takashiro is degraded and eventually empties her bladder in front of her tormentors.

Takashiro gets the hose again...

Depending on the player's choices, Minase can also actively participate in the torture, which gets even darker in this scenario. Kitami leaves him in charge as he forces a hose down Takashiro's throat to the point of her losing consciousness. He urges her to join their group, but Takashiro refuses.

Kitami and Minase then push at the woman's engorged abdomen, causing her to urinate forcefully. Minase uses a large syringe to push the secreted liquids back inside her, and inserts more bodily fluids collected from Kitami's male followers. He then has sex with her in much the same way as the anime. Afterwards, Takashiro finally pushes out all the liquid inside her with great force as she orgasms.

In a later story point in which Minase continues down a dark path, he sees Takashiro water tortured again by Kitami's lackey Maki Kurimoto.