Welcome to the Bible Black Wiki

This wiki is a comprehensive encyclopedia about everything related to the Bible Black series.
There are currently 427 pages, 1,955 images and 8,770 edits since January 2012.
Join the Bible Black community on Facebook 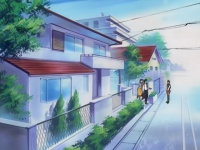 The Minase house is the home of Academy student Taki Minase and his cousin Yukiko Minase. The location is featured in the first and second Bible Black games and first anime series Bible Black: La Noche de Walpurgis.

It is a two-story house, with Minase's room on the second floor. The house is located at about a 10 minute walk from the Academy, and has a wall and gate surrounding it. There is a nameplate on the wall that reads Minase.

One day, Minase arrives home late after a visit to his classmate Kaori Saeki. The obsessive girl Rika Shiraki unexpectedly pays him a visit, completely absorbed in the love spell Minase cast on her earlier. They have sex in Minase's room, almost ripping the curtains on his bedroom window. However, Minase's friend and neighbor awkwardly catches them in the act when she unexpectedly runs up the stairs to visit him for dinner.

Sometime later, Minase unwittingly puts a spell on his cousin Yukiko after coming home infused with a demon given to him by the evil Academy nurse Reika Kitami. He lewdly touches his cousin, causing her to be overcome with arousal. She quickly retreats to her room and vigorously masturbates.

After Minase shakes off the demon and returns to his senses, he brings his art professor Hiroko Takashiro to his house to protect her from Kitami. He later joins her to discuss a plan to defeat the evil witch. However, Takashiro loses her composure due to the large amount of aphrodisiac pills she has been force fed. She begs Minase to make love to him and he obliges. The pair have sex once more in the morning, again facing Minase's window curtain. Unbeknownst to them, Rika Shiraki stands in front of the house, brooding revenge on Minase for neglecting her.
Read full article...

April 23, 2018
A while back, the Bible Black license outside of Japan was acquired by the American company FAKKU. Check it out on their new page. We can only hope for some new Bible Black release!
Biberoi (talk)
March 22, 2018
Yet another new page sees the light of day. Read all about the ritual blades used at various points in the series.
Biberoi (talk)
March 4, 2018
Another new page was added to the site. This time about the various magic circles that appear throughout the series. Check it out!
Biberoi (talk) 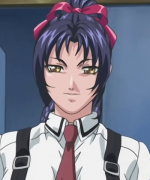 As a student she becomes both the victim and perpetrator of dark magic rituals. She is magically seduced by the unpopular Academy student Hiratani. When released from the spell she unsuccessfully attempts to gain the Devil's power herself by joining Hiroko Takashiro's witchcraft club and kidnapping Reika Kitami, the newly transferred student she developed a crush on.

Kozono is the president of the student council and appears to come from a wealthy family, as she is driven to school every day in a luxurious car. She also has several thugs at her disposal.

She is openly lesbian and has a relationship with her fellow council member Junko Mochida. They do not seem particularly secretive about their relationship, and even have sex in the council classroom at school.
Read full article...

You are welcome to contribute to this wiki! But please read the rules and guidelines before you do. Some core guidelines include:

Want to be an anime affiliate? Drop me a note!