It was first released in Japan on the 25th of December, 2002 [1] and in the United States on the 16th of December, 2003 under the name Revelations in a double feature containing both this episode and the sixth and final one Black Descent.[2]

Rika Shiraki takes revenge on Taki Minase for neglecting her. When the night of Walpurgis begins, Minase desperately tries to save his childhood friend Kurumi Imari from the clutches of the witch Reika Kitami with the help of his teacher Hiroko Takashiro.

Minase in bed with teacher Takashiro.

In Minase's room, Taki Minase is laying in bed with his art professor Hiroko Takashiro following an intense love making session they shared shortly before. He asks her if she has trouble sleeping, but Takashiro, still under the influence of an overdose of aphrodisiacs she received from the evil school nurse Reika Kitami, becomes aroused again and teases her student into having sex with her once more.

Shiraki plots her revenge on Minase for his betrayal outside his house.

As the two passionately make love until dawn, Minase's girlfriend Rika Shiraki is standing outside the house, brooding a vengeful plan.

In the morning, Minase thinks back to the previous night, when he was forced to have sex with his childhood friend and classmate Kurumi Imari.

Still intent on saving her from the evil Kitami, he runs to Saeki's apartment where yesterday's events took place, leaving a sleeping Takashiro behind in his bed.

Surprisingly, when Minase arrives, the door to the apartment is unlocked. The dark room inside is completely empty, save from a chair with Imari's school uniform and the drawing of an encircled hexagram on the floor. 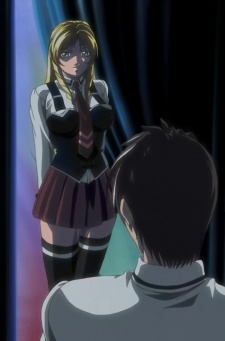 When Minase turns around to leave, he runs into Shiraki, who apparently secretly followed him to Saeki's place. The girl walks up to him and suddenly stabs him through the abdomen with a small knife.

As Minase collapses to the floor and bleeds profusely, the girl starts crying and says she loves only him and blames him for not caring she had sex with someone else. She sobs that he did nothing to help her when she was raped by the art club students the day before. Minase is horrified when she tells him she stopped by his house earlier, believing Shiraki murdered Takashiro. With his life draining away, Shiraki begs Minase to have sex with her one last time. 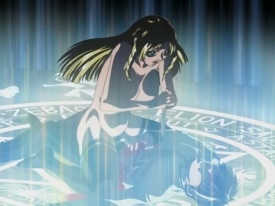 Shiraki about to deliver the killing blow to Minase while having sex with him.

Shiraki aggressively starts making love to Minase as he continues to lose more blood. The pentagram circle on the floor glows in an eerie blue light as they both orgasm. Shiraki thanks Minase and tells him she loves him, then raises the knife once more to deliver the killing-blow to his chest. However, Takashiro suddenly appears behind her and casts a spell:

A blinding yellow light shoots out the teacher's palm, causing Shiraki to drop the knife and fall to the floor stunned and unconscious. Takashiro rushes over to Minase's dying body and tells him not to move while she casts another spell over his blood-soaked wound on his abdomen.

A magic yellow light cleanly heals the cut. As Takashiro helps the boy up, she tells him she was caught off guard the other day, but will not let that happen again. 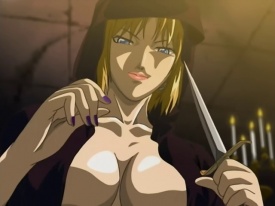 Kitami cuts to the chase in preparation of her ritual with Imari. 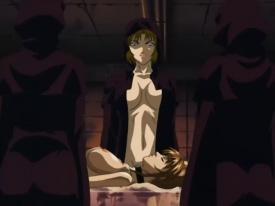 Kitami and her followers stand over the witch' vessel to be: Imari.

Kitami herself is standing over Imari's unconscious body laying on a pedestal in the middle of the room. She orders the purification of the altar and the filling of the holy cup.

The male members ejaculate into a golden chalice sitting on Imari's chest. When the cup is filled to the brim, Kitami slashes one of her wrists and lets the blood ooze out into the cup while reciting:

"We call upon the Lord of Darkness. And he shall become our God." 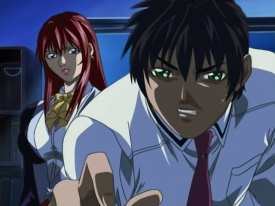 Back in Minase's room, Minase throws the Bible Black against a wall enraged and curses himself for finding it. He regrets that without it, Shiraki and Imari would not have been in this situation.

Takashiro tells him Imari is probably in the school basement. The boy immediately runs for the door, but Takashiro warns him that if he confronts Kitami now he will just end up like the day before. Minase asks his teacher to use her powers to help him, but she says her magic is no match for the evil power the witch possesses. She claims Imari will stay alive until midnight and that there is one spell in the book that might be able to stop Kitami.

The blood covered Forbidden Spell page in the Bible Black.

Takashiro then uses Minase's computer to research the so called Forbidden Spell written on the page covered by Rie Morita's blood on Walpurgis Night twelve years prior. She tries to piece together the spell using the book and her memories from when she had her own magic club, but admits it is a long shot. She says that they only need to delay Kitami long enough until her contract with the Devil expires and she dies. If they fail, Kitami will exchange bodies with Imari and the girl will be sent to hell for Kitami's sins. 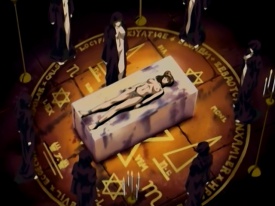 Imari is prepared for Kitami's ritual.

In the school basement, Kitami speeches to her followers that tonight she will leave her body and be reborn inside Imari, who is firmly tied with hands and feet to the four corners of the altar. The witch promises to punish those who are wretched and sinful, and that she will become the ruler of the next millennium, leaving her name in the Book of RevelationWP.

Minase and Takashiro work to a deadline.

Meanwhile, Minase and Takashiro are hard at work translating and interpreting the spell to stop Kitami. Minase notices it is almost half an hour to midnight and Takashiro encourages him not to give up. 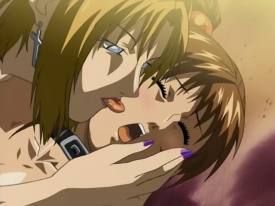 Kitami chants as Imari wakes up, screaming and begging Kitami to stop abusing her. Kitami muses how she cannot believe the girl's body will become hers tonight. She undoes Imari's chastity belt and starts giving her oral sex. She says Imari must have been saving herself for a long time and assures her that taking her virginity will only hurt for a second. Imari screams and begs for her life.

At the same time, Minase and Takashiro arrive at the school. Takashiro notes that it is too quiet and dark and suspects Kitami created a barrier to keep them out. She uses her lipstick to draw a pentagram on the glass door and recites a spell:

Instantly, the glass shatters and the pair runs inside. 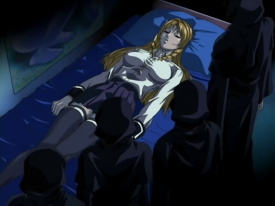 Shiraki gets a social call from Kitami evil male followers.

Four robed figures meanwhile walk up to Minase's house and into his room where Shiraki is still resting unconscious in bed. As they close in on her they are suddenly interrupted when Minase's live-in cousin Yukiko Minase comes home. She walks into the house and complains about a girl bailing on her for her boyfriend. She is quickly grabbed by the intruders when entering Minase's room.

Saeki's and her coven girls protect their mistress.

Takashiro and Minase are making their way to the basement when Kaori Saeki and her lackeys Jun and Maki block their way. She says she knew they would come, despite her mistress Kitami warning them not to interfere. The girls and Takashiro start exchanging spells: 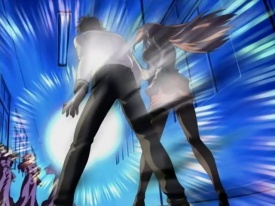 The coven and Takashiro clash when they block the way to the basement.

A blinding flash lights up the hallway as the spells clash in mid-air. The coven girls struggle and use all their power to withstand the torrent of magic beams, but when the light fades they are knocked out on the floor. 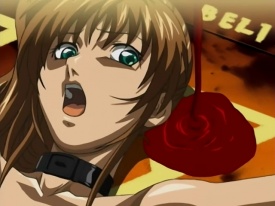 Down in the ritual chamber, Imari screams when Kitami's blood drips next to her on the altar. She begs her to stop the ritual, saying they are all crazy, but Kitami continues her appeal to the Devil:

Kitami about to enter Imari.

Her followers repeat the last chant and the pentacle circle on the floor starts to glow blue. As Kitami is about to have intercourse with Imari, who screams Minase's name, she continues:

"Open the gates of eternity. The King of Glory shall enter. Lord of Sabbath, Lord of Baphomet, accept our sacrifice. Grant my wish, and save me from this eternal agony." 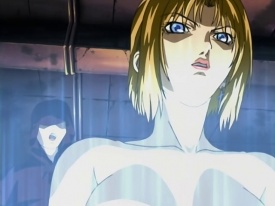 Minase reveals himself behind the witch after he sneaks into the basement.

But as Kitami is nearly penetrating Imari, Minase appears behind them, using one of the black ritual robes as a disguise. He recites to Kitami that those that rebel against God's will are commanded to leave this world before taking off his hood.

"All you can do is watch me"

Surprised but unfazed, the witch tells him he is too late to stop her and that she will kill him when she is done. Minase replies that he will not let that happen and starts to chant the spell he and Takashiro deciphered:

"Gatekeeper of the Heavens, I possess the great power of the gods, I hold the secrets of magic. I ask you to close the Gate of Orkus."'

Minase's vision of his cousin's rape.

Kitami smiles and says his spells will not work on her. Minase repeats his chant, but the woman laughs at him and calls him a fool. Then she suddenly looks straight at him, embedding a brief flash of an image in Minase's head: an image of Shiraki and his cousin Yukiko being violently raped by a group of men.

The witch tells him she ordered the girls to be killed after her followers enjoy them. Minase claims the nurse is only showing him an illusion, but Kitami replies that he can believe what he wants and continues chanting, adding that her life depends on the ritual and that she cannot waste any more time on him.

Minase pulls himself together, ignoring the disturbing images, and proceeds to recite the Forbidden Spell:

For an overview of all 75 images from this episode, see Images from Black Dinner.